Some times I get a super interesting project shooting  industrial photography in Los Angeles; in this case for  the industrial / earth moving manufacturing company LiuGong. The company So. Cal rep called me about the potential of shooting  still photography for their new national branding campaign in Southern California . After awarding me the assignment,  they asked if I would produce a still, drone and  video campaign for them and, of course, I agreed.

The following images are the stills which took us three days to shoot and we worked in tandem with the  video  and drone folks to coordinate shots.  We had very little opportunity to choreograph the images since the machines were on working job sites, so we worked with what we had. 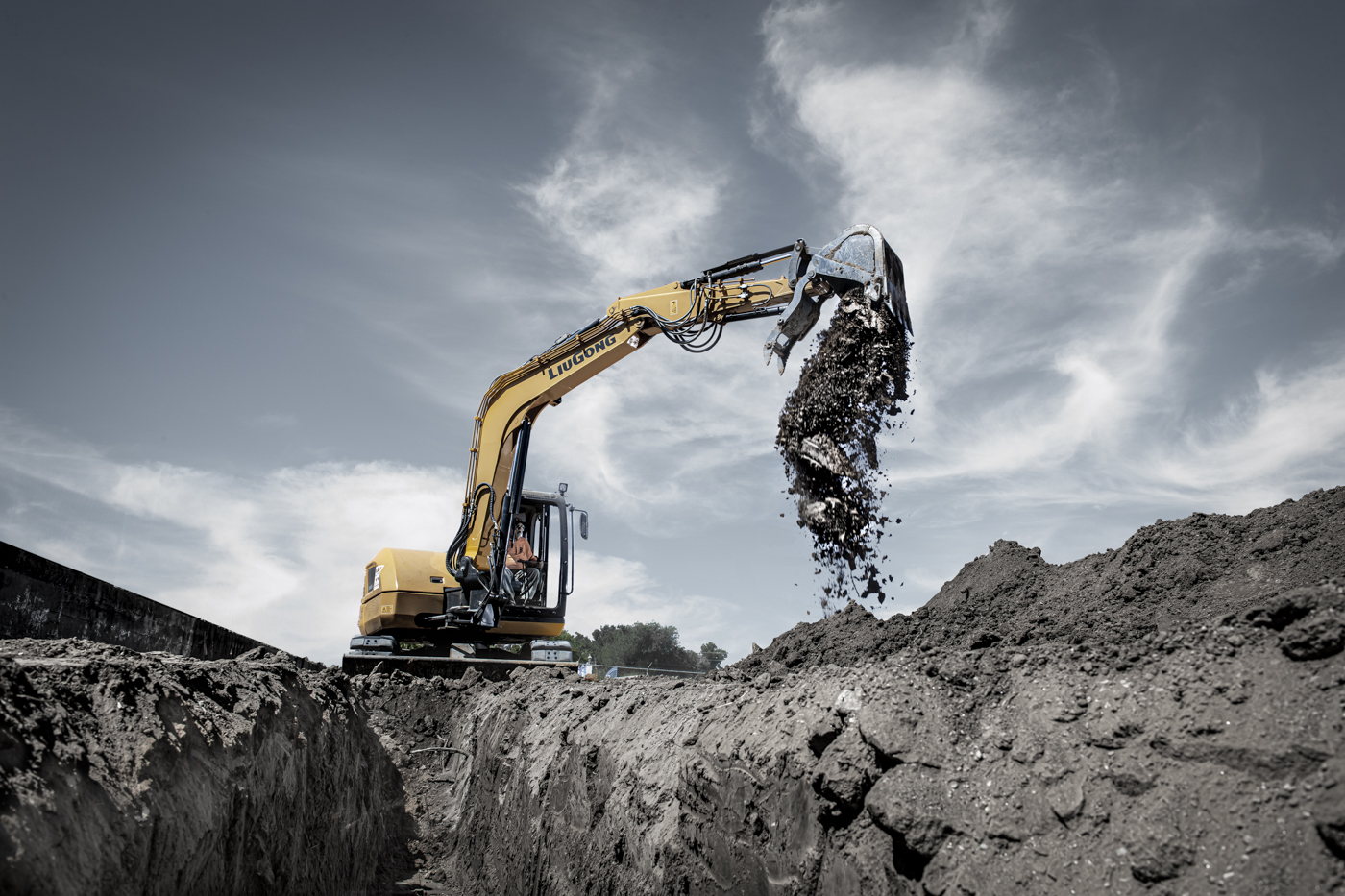 For this job we had to squeeze drone, video and stills into four hours with an eye towards this eventual image. the horizon was cleaned up and the sky was placed in post production from my own photo library.

The skies were brought in from my own photo library of clouds and I did most of the post production with exception of the key work which I farmed out to a colleague for efficiency. 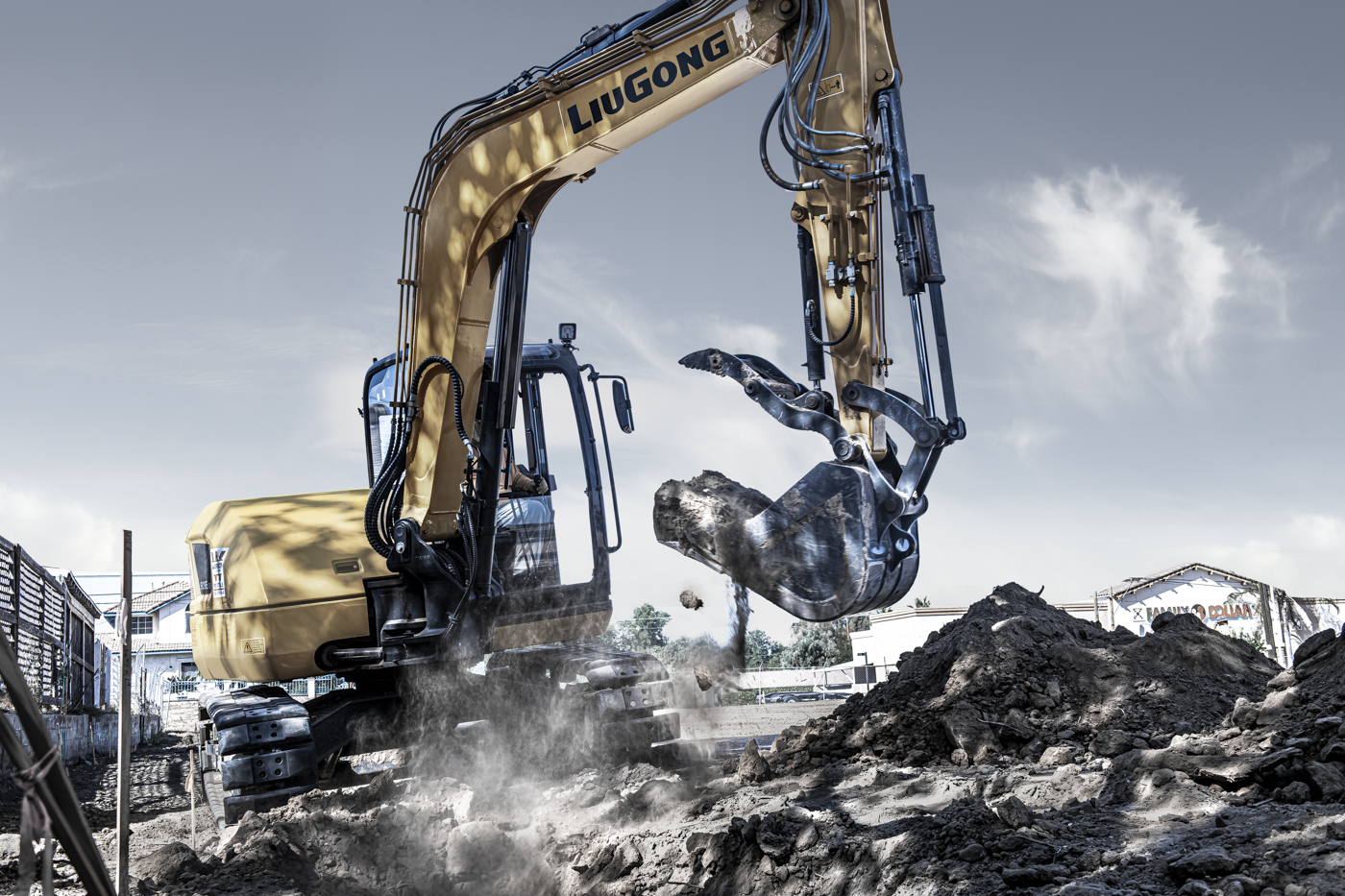 Industrial photographer in LA often requires adaptation to horrible light; in this case filtered through trees, which we modified though strobe and reflectors. We had the additional challenge of setting aside time for drone, video footage; all within a time frame four hours. The horizon was cleaned up and the sky was placed in post production from my own photo library.

Tone and color grading on all the photographs were done by me as well. After reviewing their comps, I was able to create the same photography look and tone for the skies, machine and skin tones. 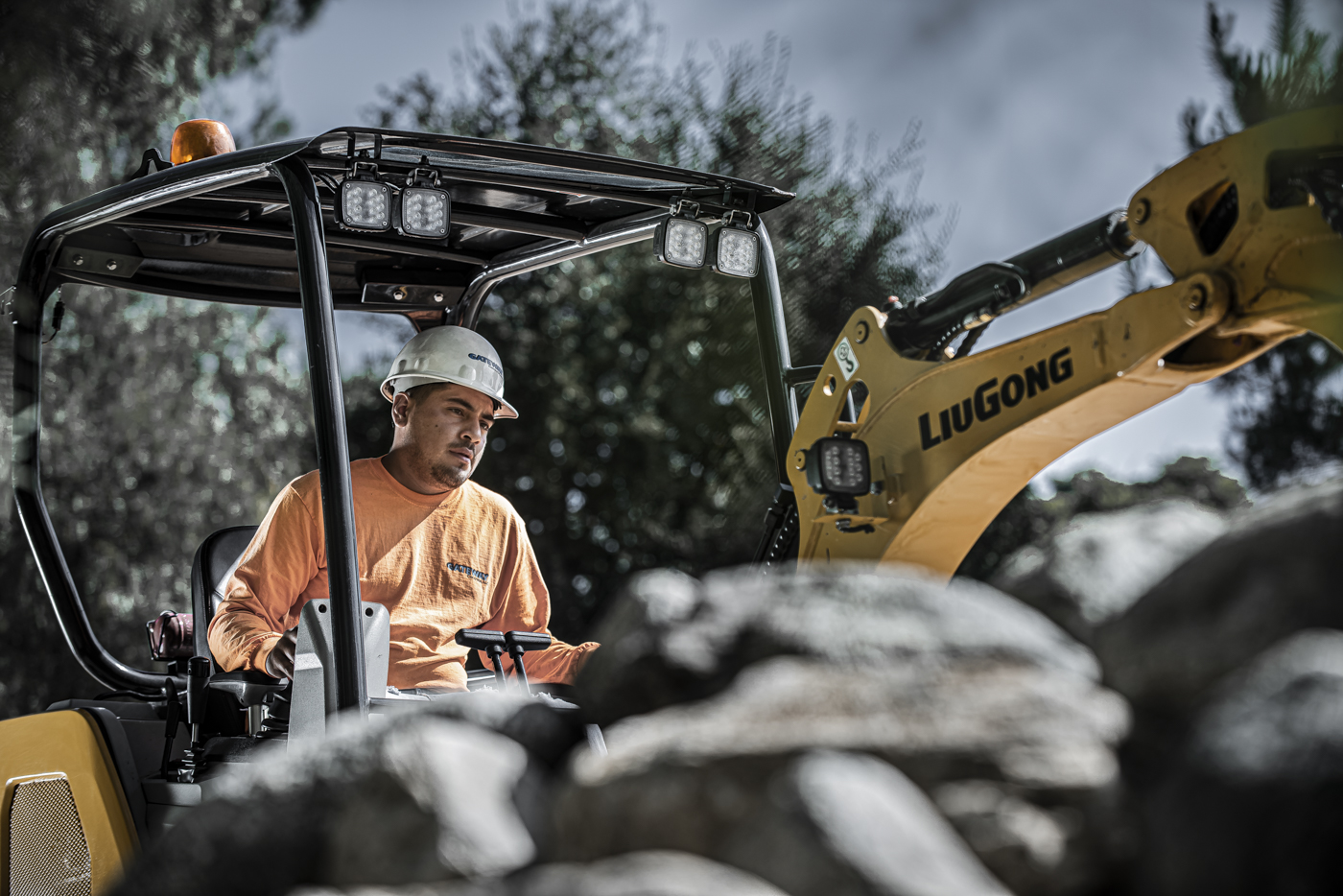 The real challenge was photographing the machines along side our videographer and drone operator in a short amount of time, and still coming up with a narrative and aesthetic the client needed.

Being an industrial photographer in Los Angeles, means that I wear several hats: Still photographer (primarily), video producer and post production artist. For this industrial photography project we had a crew of four and no more than four hours per scenario and the time frame was tight. There is something be said for pressure creating an environment for creativity.

Usually when I am pressed, I produced some of my best photography work. Perhaps it is the adrenaline or the fear of failing but I am proud that we came through under difficult circumstances for this industrial photography project. 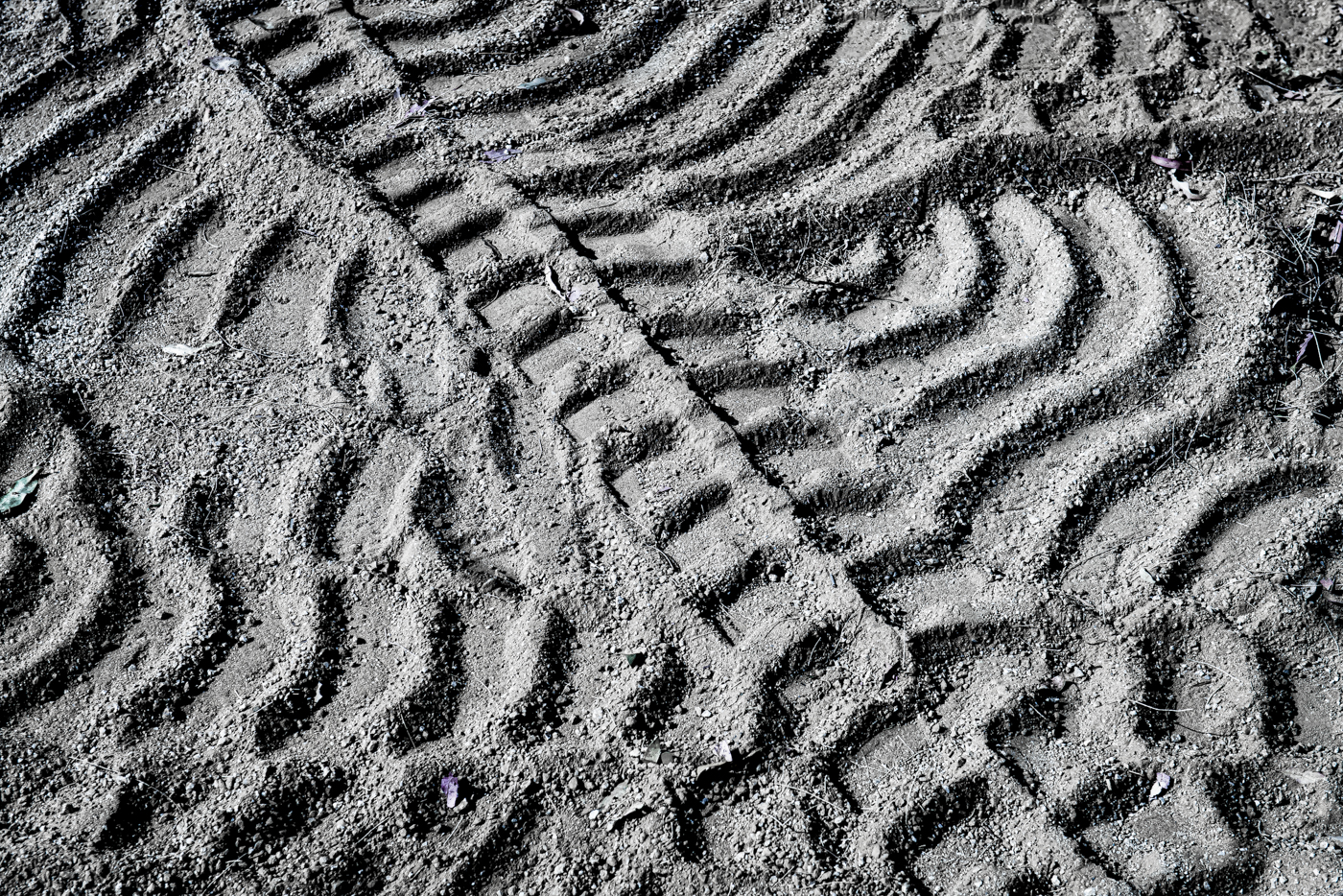 Tread marks from a small excavator that we shot for this industrial photography in Los Angeles. 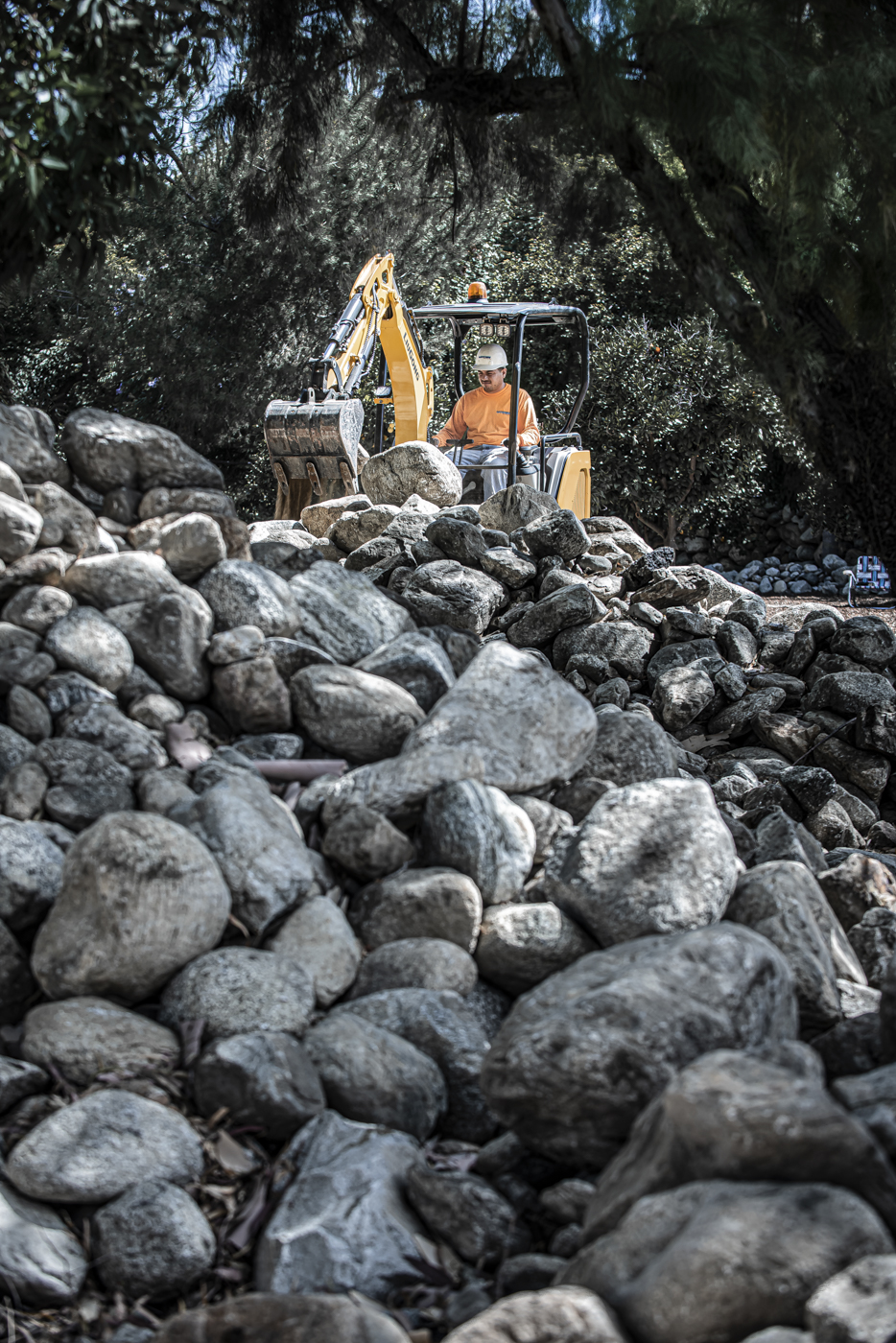 It was fairly exhilarating shooting these assignments because I was always worried about failing somehow. We had far from optimal circumstances and what the client wanted usually did not correspond with the reality on the ground.

I think it is really the uncertainty that I have come to appreciate as my great teacher.  I can never count on things going the way I have planned so I am constantly adapting and responding to unexpected events, but that is the dance; to respond on the spot and find beauty no matter the situation. This has been a good career. 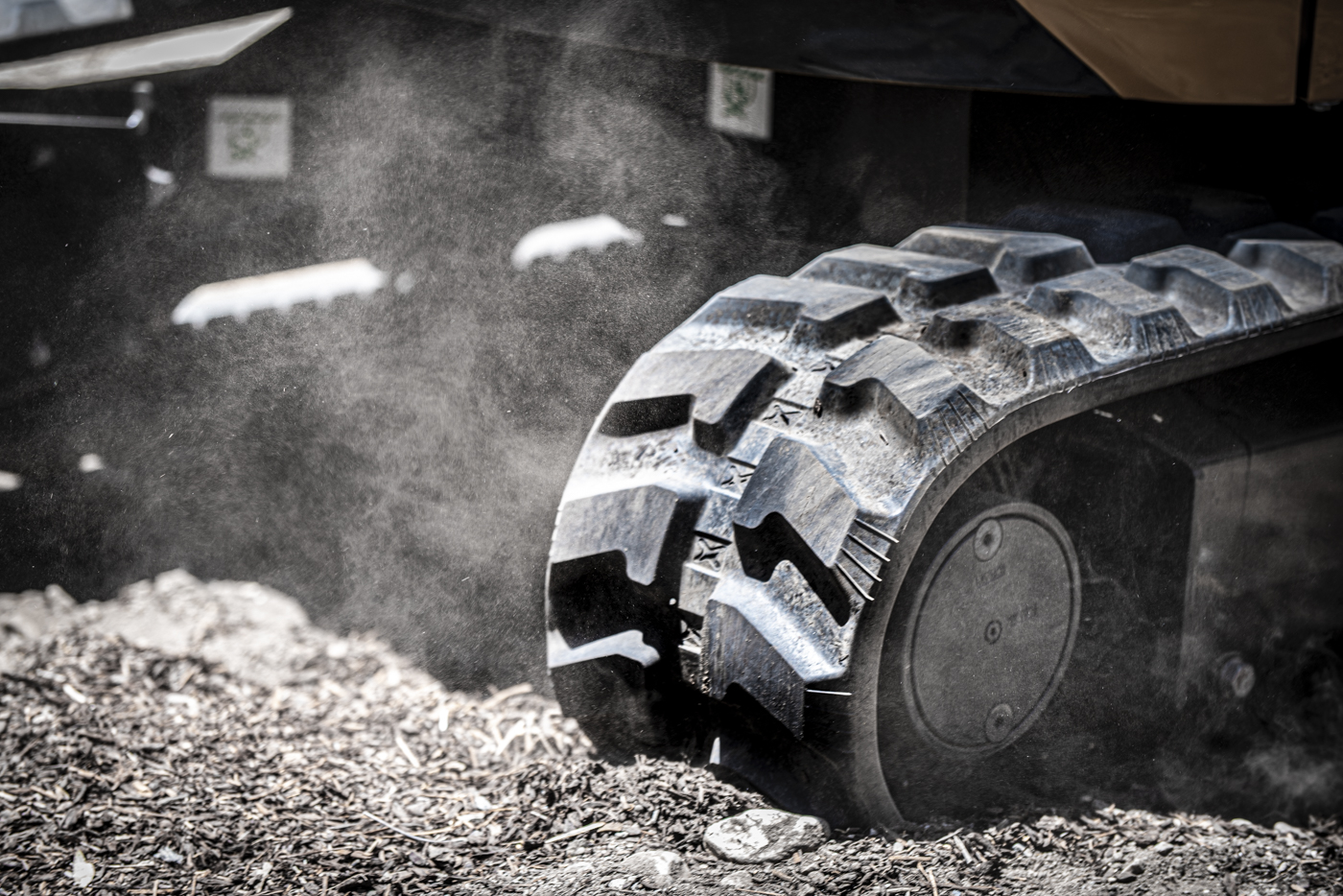 Some times it is photographing  tracks on the ground and others it shooting the environment around the subjects  or just small detail shots but always within the context of the client’s message. In this case it was “Always working”  with a gritty environmental feel to it. 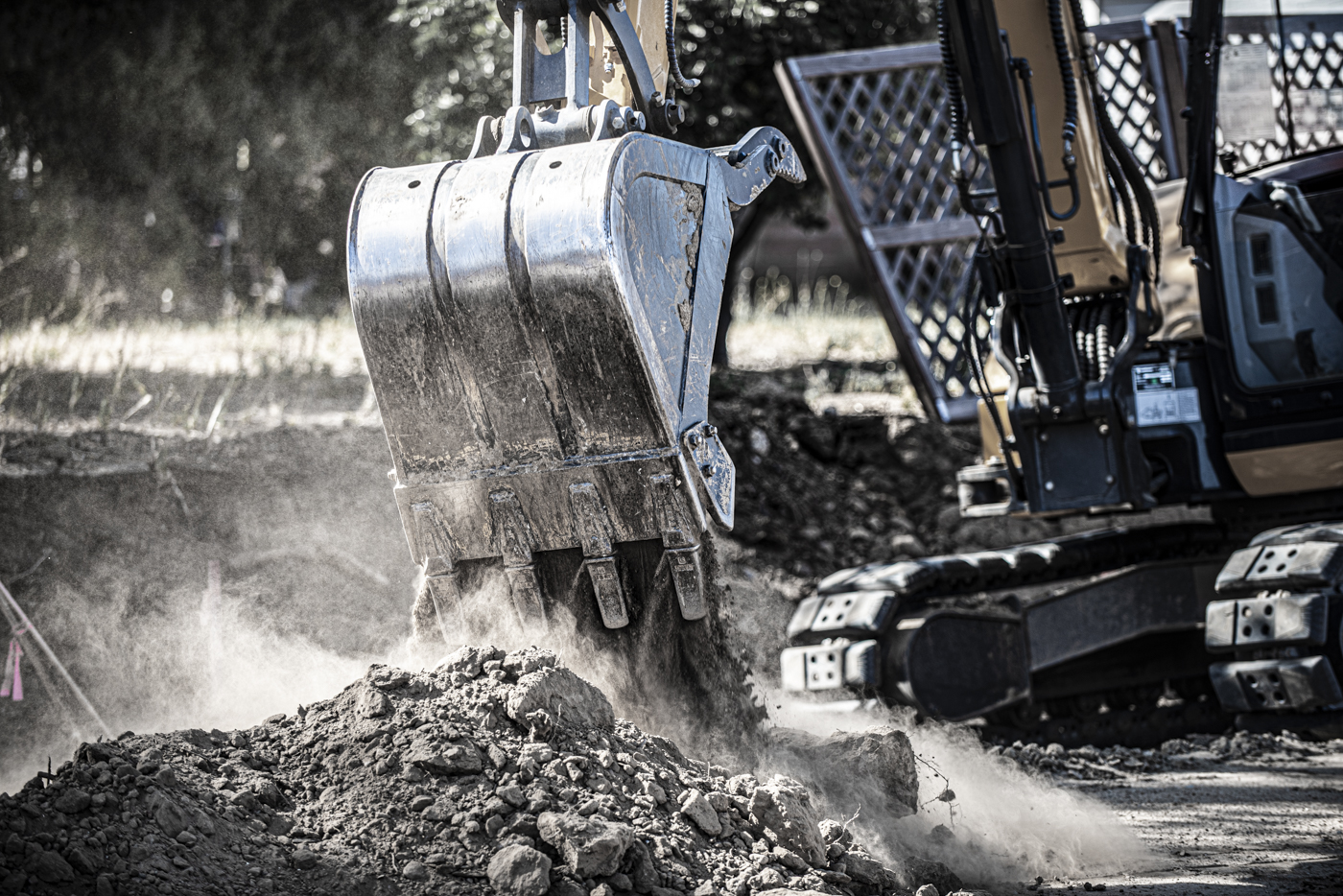 My favorite images were the big sky images which required some heroic images; not matters the background  then finding the right cloud scape to place into the scene. This was the best assignment thus far this year. 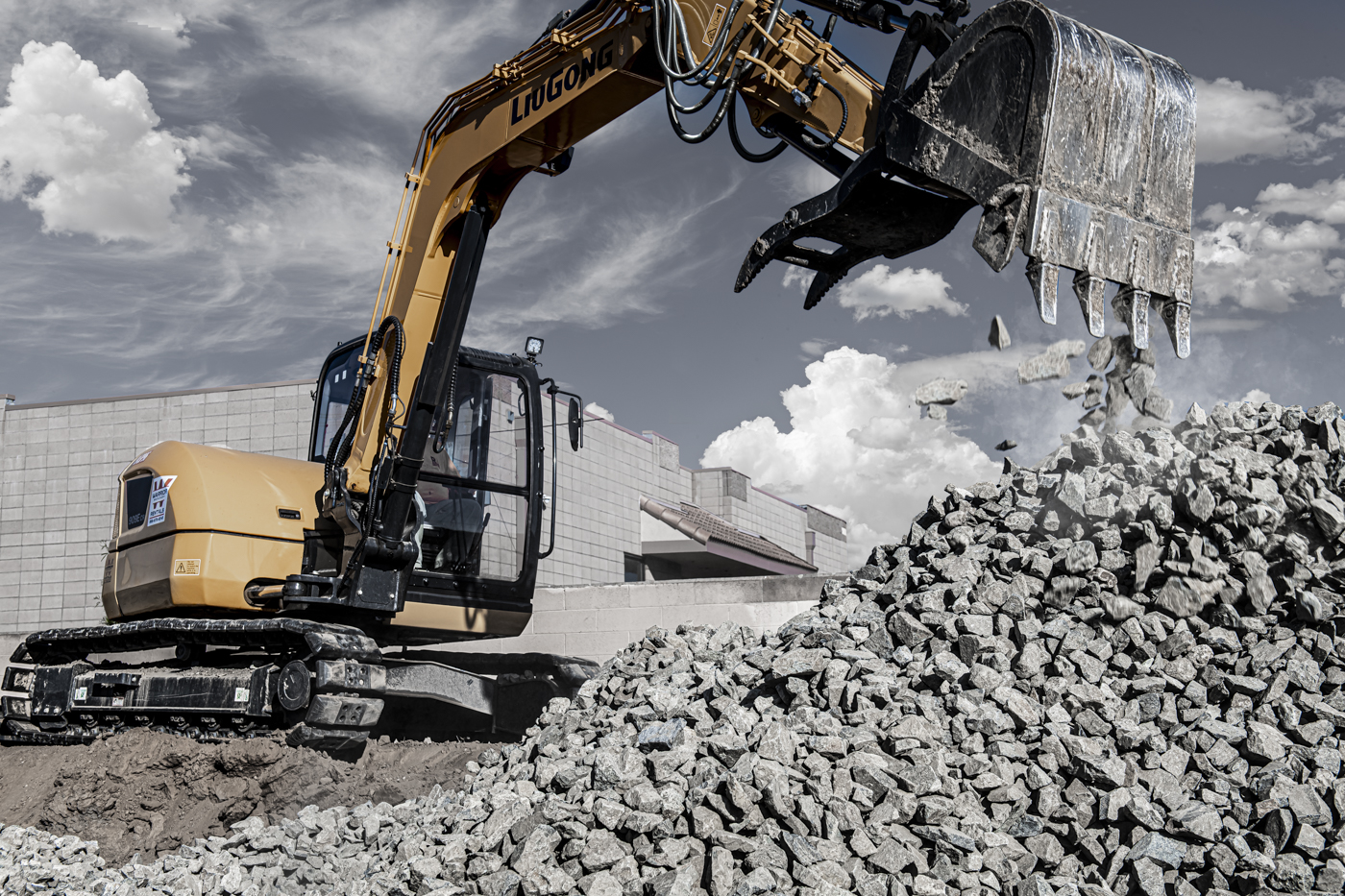 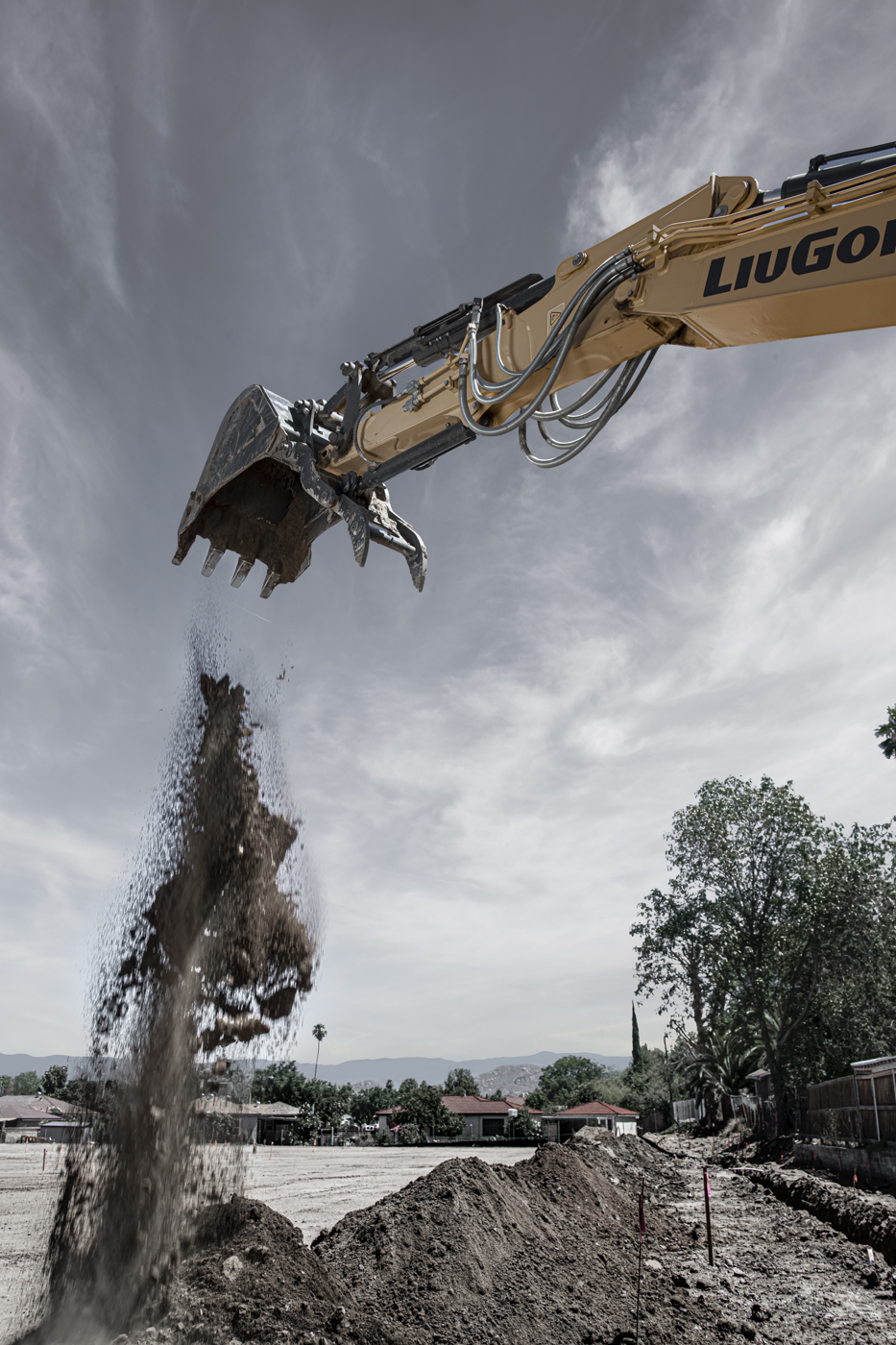 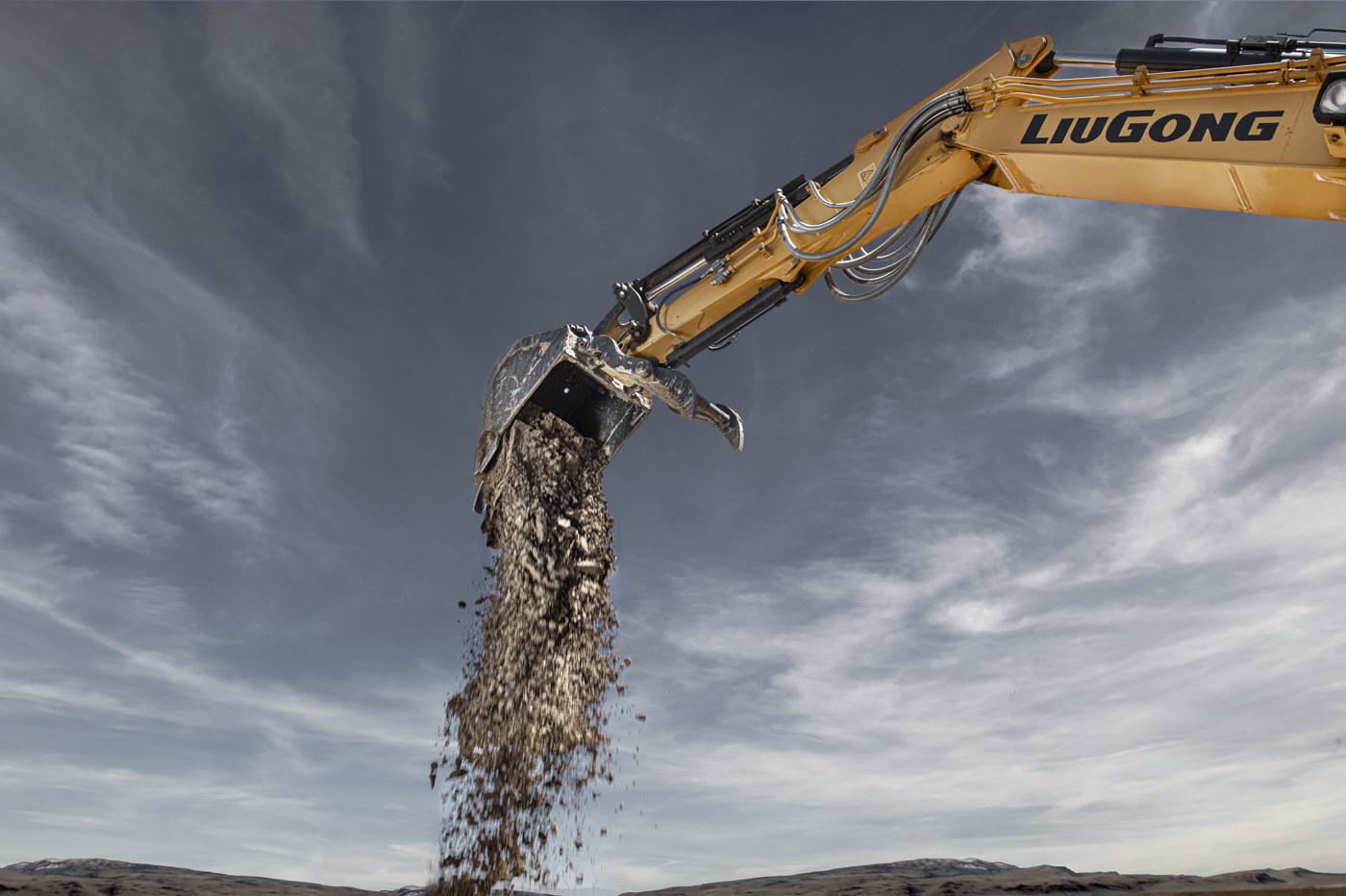 PreviousPrevious post: Easy Gets Harder to do every day.
NextNext post:Aerospace Industry Photography